Arikok National Park is home to various unique plant and animal species such as Aruba’s rare endemic rattlesnake Crotalus unicolor). This rattlesnake is locally known as the ‘Cascabel’.

The Cascabel  has a very low population density and a mortality rate between 10% and 40%.  Unfortunately 40% of all Cascabel deaths are caused by humans. These snakes are often killed with rocks or are run over by cars. Other threats to the Cascabel are donkeys and goats that often trample these snakes because the snakes are perceived as being dangerous.

The well-being of this unique snake specie is essential to Aruba’s ecosystem and biodiversity.  Therefore  Parke Arikok strives to conserve and protect the  Cascabel through continuous monitoring. The Cascabel monitoring project provides the Park wit crucial information such as; the Cascabel’s optimal habitat, its diet and movements. In addition, Parke Arikok strives to create awareness amongst local community and island visitors about the importance of the Cascabel.

The Cascabel monitoring project is a  strategic and long-term partnership established in 1993 between Arikok and experts Andy Odum (Toledo Zoological Society) and Howard Reinert (The college of New Jersey).  The monitoring occurs by catching, registering , tagging and then safely releasing the Cascabel. 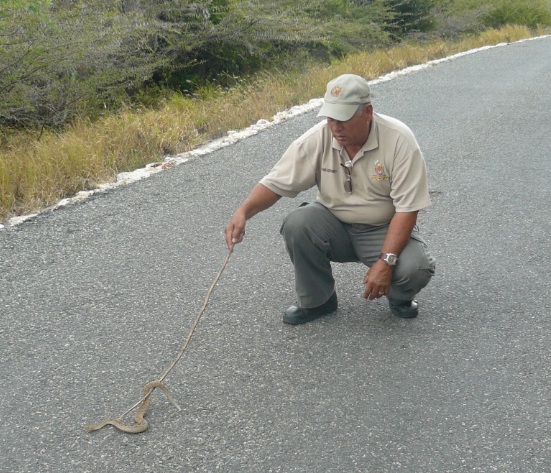 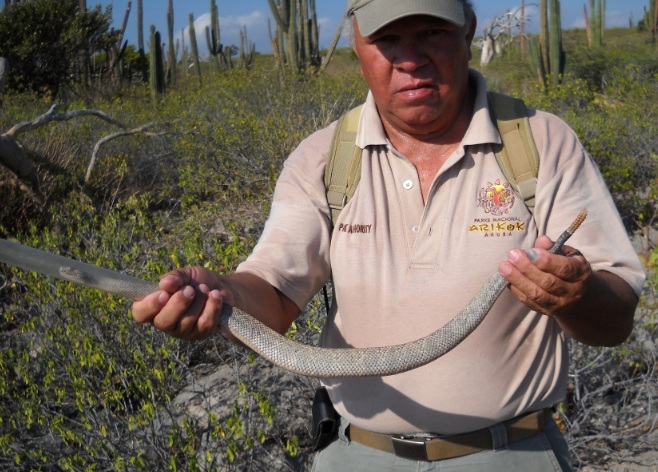 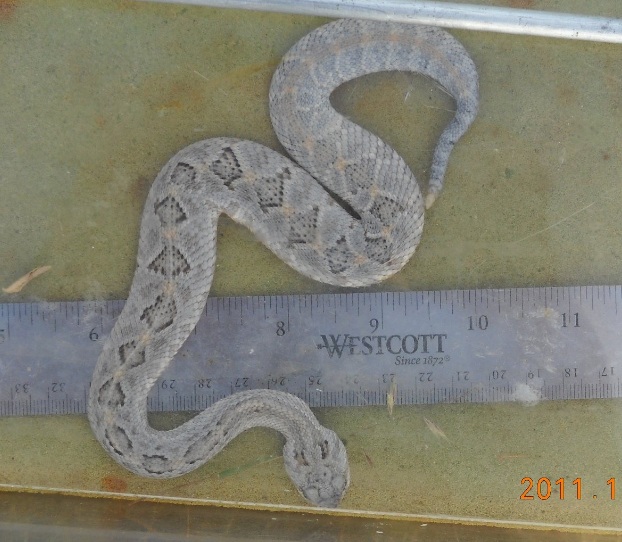 Photo 1: Within the Park highly specialized Park rangers periodically monitor the Cascabel. These rangers also respond to calls outside the Park in the case a Cascabel  is found near and Urban area or at peoples homes.

Photo 2: The Cascabel is safely registrered by using a plastic tube in order to prevent it from giving the ranger a venomous bite.

If you want more information about the Aruban rattlesnake, please download our factsheet. You can also visit the ‘ Wildaruba’  website at: http://www.wildaruba.org/Documents/Howard%20Reinert%20Cascabel-Wildaruba.pdf

Arikok National Park thanks the Herpetofauna Foundation for sponsoring a snake study conducted in the National Park.

The study’s aim is aimed at the conservation of Aruba’s endemic rattlesnake.